In Memory of
Doris Virginia
Merrell (Watson)
1941 - 2021
Click above to light a memorial candle.
Memorial Candle Tribute From
Thompson-Wilson Funeral Home
"We are honored to provide this Book of Memories to the family."
View full message >>>
Send Flowers
Plant a Tree In Memory of Your Loved One
Click Here
Menu

In the event that there is an error
in the information presented,
please contact the funeral
home by clicking here. 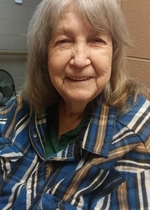 Doris Virginia (Watson) Merrell, resident of Wynne, Arkansas, departed this life on Thursday, January 21, 2021, at CrossRidge Community Hospital in Wynne at the age of 79. Doris was born in Colt, Arkansas on July 26, 1941, the daughter of Ed and Ola (McGee) Watson.

Doris lived her life in two segments in a way. The first segment was with her husband and the father of her three children, Melvin Hunt. She was a farmer, homemaker, and precious mother to her children. She was first on the scene when the original Wynne Walmart was constructed and assisted in setting it up. She also worked many years at Addison Shoe Factory. Melvin passed away in 1986, and changed her and her children’s lives forever. The second segment began several years later when Doris married John Merrell, Sr. Throughout her life with John, she enjoyed singing and traveling often, but mostly in this time, she and John enjoyed spending time with their grandchildren and great-grandchildren. Doris loved her family very much.

She is survived by a son, Wade Hunt of Wynne; two daughters, Lisa Merrell and Karla Wood, both of Wynne; a brother, Edward Watson and wife, Bea, of Wynne; eight grandchildren; six great-grandchildren; three step-children; many nieces and nephews; and a host of other relatives and friends.

Thompson-Wilson Funeral Homes abide by the Arkansas Department of Health guidelines and mandates by Governor Asa Hutchinson, requiring the wearing of masks and the practice of social distancing. ALL ATTENDEES must provide and wear their own masks before entering the funeral homes. Thank you for your kindness and cooperation in following these guidelines.