In Memory of
Cleta Faye
Prater (Burroughs)
1939 - 2021
Click above to light a memorial candle.
Memorial Candle Tribute From
Thompson-Wilson Funeral Home
"We are honored to provide this Book of Memories to the family."
View full message >>>
Send Flowers
Plant a Tree In Memory of Your Loved One
Click Here
Menu

In the event that there is an error
in the information presented,
please contact the funeral
home by clicking here. 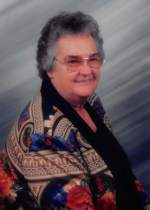 Cleta Faye (Burroughs) Prater, resident of Wynne, Arkansas, departed this life on Wednesday, January 27, 2021, at Flo & Phil Jones Hospice House in Jonesboro at the age of 81. Cleta was born in Cherry Valley on July 2, 1939, the daughter of Eugene and Vera (Strange) Burroughs.

Cleta was a homemaker and of the Assembly of God faith. She enjoyed sewing and cooking, and when she was able, she loved fishing and gardening.

She is survived by a daughter, Adriane Prater of Wynne; two grandchildren, Caitlin Winders of Wynne, and Carson Winders of Fisher; and a host of other relatives and friends.

Funeral services will be conducted privately under the direction of Thompson-Wilson Funeral Home of Wynne.